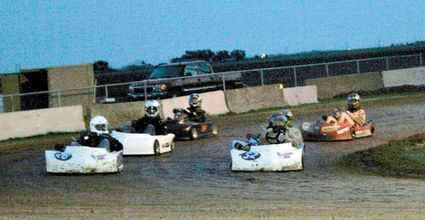 Halah Simon, driving Car 52, leads the pack into the final turn at the Alva Speedway.

Exhaust fumes filled the air as small motors sputtered to a start. An uneasy excitement showed in each driver's face.

Lightning threatened a rain delay, adding to the suspense.

This wasn't the Indianapolis 500, but Alva Speedway's go-kart race to determine which representative of each Alva school would go home Saturday night with bragging rights.

Prior to the race, the drivers adjusted their helmets and tried to fit their adult bodies in what looked like child-sized cars.

Staff delayed the start of the first race as they packed the track, drying it out from too much water earlier in the day.

After a few practice laps, Jerry Kohlrus waved the green flag signaling the drivers to go full speed ahead. The caution flag came out a couple of times as individual karts spun into the infield or just decided to stop. 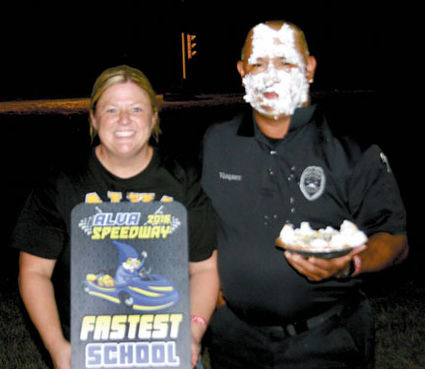 Only four of the six vehicles made it to the checkered flag.

'Leadfoot' Halah Simon skillfully negotiated the turns, gained the edge and emerged as the winning driver.

One important fact about the outcome of the race wasn't revealed until the drivers arrived at the track when it was too late to back out.

Not only would the winner have bragging rights, the loser would get a lemon meringue pie in the face.

Since two of the teachers' cars exited early, and the other three crossed the line in a fairly close cluster, Alva Police Department Officer Ron Vasquez bravely volunteered to take the pie to the face.

Licking meringue off his lips, Vasquez held on to the remainder of the pie and requested a fork.