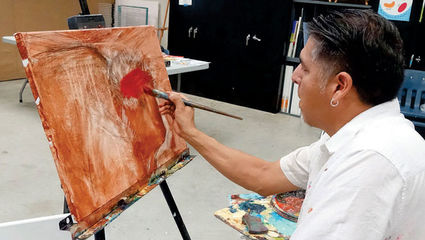 The First Friday Artwalk on Sept. 2 featured several artists. Brent Greenwood of Edmond brought his easel, canvas and paints to demonstrate his style.

Greenwood is an adjunct professor at Comanche Nation College in Lawton. One of the classes he teaches is Intro to Drawing. Greenwood explained that drawing is one of his first loves, saying, "I've been drawing forever."

The next step was Oklahoma City University and then a tour at the Institute of Indian Arts in Santa Fe, New Mexico.

"For the better part of 18 years I have been a practicing artist," he said.