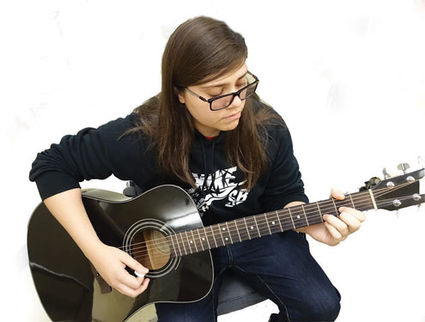 Anyone who has visited a nursing home can't help but notice a few residents who seem to be "out of it" with lolling heads and closed eyes. However, Kristin Nevarez, activity director at the Share Convalescent Home, enjoys causing a change for many in that state.

A former music major at Northwestern Oklahoma State University (NWOSU), Nevarez brings her guitar to work. She said, "Each day in my job as activities director, I try to make it around to visit with each resident and bring some fun into their lives.

"On some days, I will pull out my guitar and play a song recognizable to the resident I'm with. They will go from a blank expression to saying, 'I like that chord.'

"Even if they appear almost unconscious, when the resident recognizes a song from an earlier time in their lives, they will perk up, raise their heads and smile, sometimes trying to sing along.

"Because the song sparked a forgotten memory, some will tell me the high points in their life at the time the song became popular," she said.

Nevarez added, "If I am personally sad, I'll listen to music and it will change my mood around. I'm not the only one affected that way. I can observe the residents reacting similarly. I think it helps ease pain, soothes the state of mind, and refreshes the memory."

When asked about her future aspirations, Nevarez described a goal for her nursing home residents. She said, "I'd like to see if we can get a music program grant. With it, we could supply each resident with an iPod, along with a $50 iTunes music card where they can select their favorite music and play what they want during the day." She is hoping a $2,000 grant might come about.

When asked what it would take to get this grant, Nevarez answered, "I took the idea to my convalescent home boss, and maybe she can talk to the high-ups or administration at the hospital."

Asked if she had applied to charitable organizations, Nevarez said, "Well, I hope this interview might help!"

Nevarez grew up in Laverne and has attended NWOSU, majoring first in music education and then switching to music performance. At present, she is not in college. She started working at the nursing home about a year ago in the housekeeping department. When the activities director job came open, she applied for and landed that position.

Besides providing occasional music, Nevarez arranges an activity of the day. She said, "Our job is to help them have fun; entertain and make them happy. Whether it's one-on-one conversation, playing bingo or doing music, I enjoy it. I ask how their breakfast was, and how their morning is going."