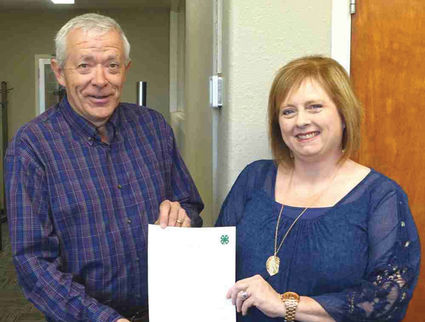 The Woods County commissioners voted unanimously to proclaim this week as OSU 4-H Week. (The proclamation is printed elsewhere in this newspaper.) Commissioner Randy McMurphy was not in attendance.

The commissioners approved a series of agenda items establishing a major road project on County Road 370. This is a two- or three-year project that will include the Wincherter Bridge north of Alva. The project is scheduled to start in early 2017.

The various agenda items included grade, drain and surface agreement between the county and ODOT; project maintenance, financing and right of way acquisition. Also, some of the agenda items addressed utility relocations between the State of Oklahoma and Chesapeake Energy.

A couple of pieces of office equipment were declared surplus. One was a 1953 counter top from the county clerk's office, and the other was a 2006 postage meter that was traded in several years ago.

Under new business, Commissioner David Hamil announced he was about to ask for bids on several trucks.

The meeting included "yes" votes on several items, including a Rockwater road crossing permit for districts one and two; approval of the Sept. 20 and Sept. 26 minutes, and approval of the blanket purchase orders.