Band of Gold rides to victory at NWOSU Homecoming 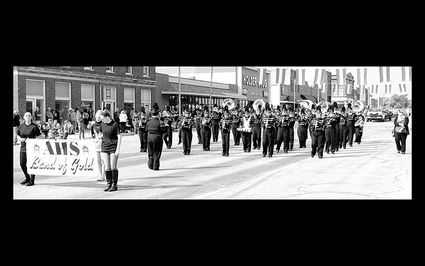 Alva's Band of Gold marches past the competition, winning the 3A marching competition during NWOSU's homecoming festivities.

"I was really happy with how we looked and played; we did good even if we don't win anything," said Cara Bradt, Alva High School band director, before receiving the band's scores.

The Alva Band of Gold took first place in class 3A, beating two of their main competitors, the Fairview and Chisholm bands. They received high marks on their overall marching and sound. The students who accepted the award for the band were Jacob Stewart, first chair saxophone player, and Braeden Cook, first chair trumpet player, two sophomore band members.

Throughout the parade the band played the Scooby-Doo theme song, "Trumpets" by Jason Derulo, and the high school fight song. They played "Trumpets" with a slower side-step march to fit its slower beat. The band also continuously flashed their horns in between songs, while the drum line performed a cadence. Playing these songs well and being synchronized with commands helped the band to take first.