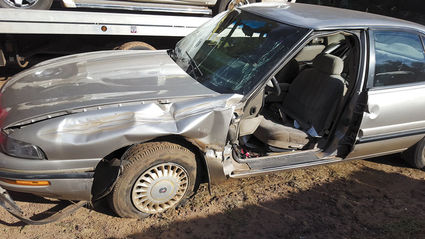 After eight impacts, Susan Chaffin's car is covered in dents. Firefighters removed the door because she was pinned inside. The wreck occurred Friday, Sept. 30.

Susan Chaffin of Alva experienced the kind of ride only found in carnivals and amusement parks after a collision last Friday. At 4:26 p.m. on Sept. 30, Chaffin, 57, was driving a 1997 Buick north on Eighth Street. She stopped at the stop sign at the intersection with Oklahoma Boulevard (U.S. Highway 64) and then proceeded to make a left turn, not seeing the approaching vehicle. Dennis Kilmer, 43, of Alva was traveling west in the inside lane of Oklahoma Boulevard in a 2001 Dodge.