Rangers steamroll over the Crimson Storm early for the win 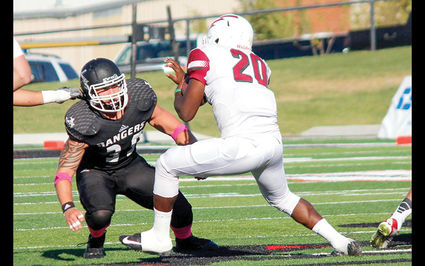 Ranger linebacker Kyler Ferguson (39) is there to make the tackle on SNU's running back, Quincey Whitfield (20), to stop him for a short gain.

The Northwestern Oklahoma State football team steamrolled over the Crimson Storm as the Rangers looked to get their first back-to-back wins of the season, hosting Southern Nazarene on Ranger Field on Oct. 22 for a 4 p.m. kickoff.

Despite the Crimson Storm getting the first points on the board after forcing the Rangers to punt the ball away, Southern Nazarene kept their first and only lead of the game briefly as Northwestern answered right back.

Starting their second possession of the game on their 25-yard line, the Rangers began the drive on an 18-yard pass completion between Reid Miller an...