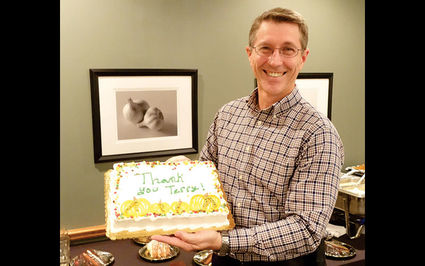 Terry Cline, retiring board member from the Alva Hospital Authority, was thanked for his service with a cake at the end of Tuesday night's meeting. Terry briefly spoke, saying that when Arden Chaffee asked him to serve on the hospital board he wasn't very forthcoming as to how much work was going to be involved. He said that he and his family had just moved to Alva after his military career and he looked upon it as an opportunity to get to know people in the community and be of service.