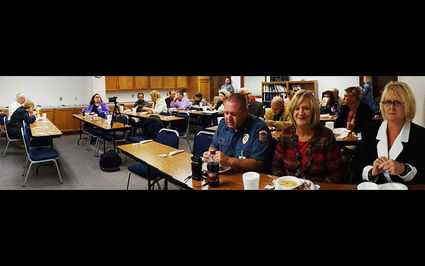 The BJCC Community Advisory Committee met at noon on Friday to hear Oklahoma Department of Corrections Director Joe Allbaugh tell about his thoughts for the future. He and Warden Janice Melton are at far left. At near right, is Security Chief David Louthan, Chairman of the Advisory Committee Brenda Rose and board member Sonja Williams. During the meeting, BJCC Warden Janice Melton told the crowd this was Chief Louthan's last day as he would soon become deputy warden at James Crabtree Correctional Center in Helena. Jason Bryant, another former BJCC employee, is the warden at that prison.

After approving the minutes of the last meeting, Freelin Roberts gave the committee's treasurer's report.

Roberts reported that in the past month the Chapel Fund had seen a required distribution from the Communities Foundation of Oklahoma in the amount of $1,996. In addition, the fund had covered an expenditure for a part controller in the Benson Center, relating to fire control.

The committee approved the treasurer's report.

"We're still making progress on hiring officers," Melton said. "We're still trying to get back up to where we can convert to eight-hour shifts." Staff members are currently working 12-hour shifts, she said.

"It's good news/bad news. It's good news budget-wise, but staff won't be bringing in those big overtime checks. But they will have time with their families. Most of our officers – after being on 12's for about three years – are ready for some time."

Also, BJCC is about to lose its chief, Melton said.

"If you haven't heard already, a big, big staff change fixing to happen is Chief Louthan, who's been our chief here for three years and at Bill Johnson for 20 years, is taking a promotion: deputy warden at James Crabtree," Melton said. "This is not only his last advisory council, it may be his last day at Bill Johnson. He's going to be a great deputy there." Melton added that BJCC would be looking for a new chief.

Melton and her staff also reported the efforts of the prison's Gap Program, which has just completed a large project for Washington Elementary's spring carnival.

Offenders in the Gap Program make things out of the wooden pallets the prison's supplies are delivered on and, hence, are essentially free. Offenders cut the wood into different shapes and create artwork that is then donated to organizations that can sell them to raise money for their own work.

The project just completed by the Gap Program was a large number of Oklahoma signs. The staff member in charge of the program said the offenders made 36 of them a day.

"It's a way that the offenders are providing a service back to the community," said Melton.

Warden Janice Melton welcomed guests from Guymon to the meeting. These guests included Janelle King, an attorney with the Oklahoma Indigents Defense System, and two other Guymon guests – an assistant district attorney and a private attorney. The three attended the meeting to learn more about some of BJCC's diversionary programs, such as the delayed sentence program.

Melton said BJCC staff had been working to renew or establish contacts with people, judges and others in the judicial system, adding "so we're always glad when we have people who want to come and see it live, because it's a very different experience if you can see it versus just reading about it on paper."

The delayed sentence program, which is for youthful, first-time offenders with a delayed incarceration of between six months and a year in length, aims to provide the offenders, or "trainees," tools to help them re-enter society as a productive citizen. According to an online brochure, "Treatment staff, in conjunction with correctional staff, provide a daily structured program with face-to-face therapeutic contacts utilizing group and individual counseling techniques. Upon arrival to the program, all trainees participate in the Regimented Treatment program and promote to the Therapeutic Community. Progression through the program is based upon the trainee's ability to model pro-social attitudes and behaviors."

(To read the brochure in its entirety, visit http://www.ok.gov/doc/documents/BJCCDelayedSentencingBrochure.pdf.)

Once the committee's business was handled, Oklahoma Department of Corrections Director Joe Allbaugh rose to address the group. The majority of his discussion will appear in a future issue of the paper.

Allbaugh said one of his main reasons for wanting to be there was simply to thank the local community for being so involved with BJCC. This active community involvement is a big reason BJCC is unique in the state, why it is the DOC's most successful facility. 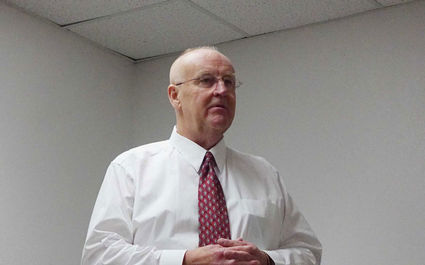 "This is such a unique program – it is the most successful program that we have," he said. "Delayed sentencing, the RID (Regimented Inmate Discipline) program – it absolutely works. That's why I wanted to come: I wanted to say thank you to the community for everything that you do, that you have done, because without your support, this program, this facility would not be as successful as it is today."

Allbaugh said that of the 52 facilities the DOC oversees statewide, BJCC stands apart. "To my knowledge, this is the only one that there's an active community and a real partnership between the community citizens and the facility. I thank you for stepping up as a community and providing assistance, guidance to this facility in the way you have for the last 25 or so years. This is the exception as opposed to the rule. I'd like to make it the rule," he said.