The man with the kitchen knife 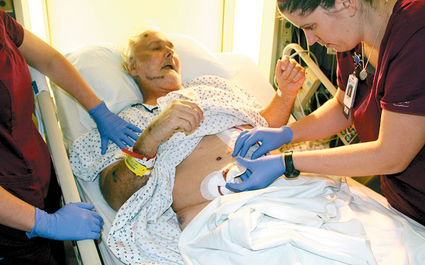 Gary Clark, diagnosed with schizophrenia years ago, is treated at the hospital after being sprayed with pepper balls, shocked with Tasers and shot with guns by Wagoner County and Broken Arrow officers in August 2014.

By the afternoon of Aug. 18, 2014, Broken Arrow resident Larry Clark had begun to suspect something was wrong with his 60-year-old brother Gary.

For about a week, Gary Clark had been acting erratic and delusional. He left clean clothes and cigarettes out in the rain, wasn't taking food, and burned some of his possessions in a trash barrel outside the small cottage he lived in behind Larry's house in rural Wagoner County.

Gary had been diagnosed with schizophrenia years earlier and was hospitalized multiple times after failing to take his medication. Larry was given power of attorney over Gary's affairs and allowed him to live in the cottage behind his house.

Larry was familiar with the symptoms Gary was showing that August afternoon. Gary also did not recognize him at times and would tell him to get out of the cottage, Larry said in a deposition.

The afternoon of Aug. 18, Larry went to the cottage wanting to take Gary to a mental health appointment. He opened the door and saw Gary holding a 10-inch kitchen knife. Larry said he walked into the knife but it did not break the skin.

"I've had mosquito bites worse than this," Larry said in the deposition.

Gary did not say anything and did not follow Larry when he left the cottage.

Larry returned to his house and called Gary's pastor but did not reach him. He then called 911 to request an emergency order of detention, which would require police to take Gary to a crisis center or mental hospital.

"When they got there, I asked them not to let this turn into a suicide by cop," Larry said in the deposition. "I wanted them to be aware that he was just standing there and that he was a mental health patient. I was afraid this thing was going to go south."

And things did go south.

A few minutes later, a Wagoner County deputy, Maj. Dustin Dorr, arrived, and the three deputies went to the cottage and found Gary standing on the porch, holding the knife. The deputies were about 50 feet away, police records show.

Dorr asked the two deputies to call the Broken Arrow Police Department's "less lethal" team and attempt to talk to Gary, who stood silently. Flanked by the deputies, who had their guns drawn, Dorr told Gary he was going to jail for assaulting his brother, Dorr said in court transcripts. Gary didn't say a word, but made occasional random gestures, gave Dorr the middle finger and motioned for him to come closer, Dorr said.

"While I was still attempting to communicate with him, I advised him he was under arrest for the assault on his brother," Dorr said later in court.

"Instead of calling for a CIT (crisis intervention team), Colbert allowed the 'less lethal' team from (Broken Arrow) to gather in a group to launch an attack from a tree approximately 40-50 feet from the cottage porch," a lawsuit stemming from the case states.

The group shot 30 to 40 pepper balls at Gary, striking him all over his body, including in the head and filling the air with the chemical agents, the lawsuit states.

"Gary Clark stood there like a statue. I mean, these balls are hitting and he showed no effect whenever they hit him until the end," Dorr testified in court.

Law enforcement officers later stated that after several hits from pepper balls, Gary charged at Dorr and others. The lawsuit recounts the event differently, stating that Gary only stepped off the porch after he breathed in and was blinded by the chemical agents. When he came off the porch, both sides say Gary was shocked by two Tasers and then officers fired at Gary, hitting him three times.

"You breathe in enough of that pepper agent, you're not going to be able to see," said Grant Husky, Gary's defense attorney.

Gary was taken to a hospital and survived the gunshot wounds. He was later taken to jail and charged with assault and battery with a dangerous weapon. After 14 months in jail, Gary was found not guilty by reason of insanity and released to his brother's custody.

"They didn't want to admit to filing a charge when they shouldn't have," Husky told Oklahoma Watch.

The City of Broken Arrow later settled a claim by Gary's family without a lawsuit being filed, and agreed to pay more than $150,000 to the family for his medical expenses without admitting wrongdoing. The city also agreed to pay at least $5,000 for an expert to review the department's mental-health and use-of-force policies.

The family sued the county, but no similar deal has been reached. The case is pending.

"It's been a two-year-long nightmare, and it's still going on," said Larry Clark, adding his brother is back in the cottage, but in a wheelchair and can hardly walk.

The suit against Wagoner County alleges that deputies acted to "recklessly provoke and shoot a person they knew was suffering from a mental illness" and then "knowingly and publicly mischaracterized that shooting to conceal their own provocation."

Wagoner County and the deputies named in the suit denied wrongdoing and said the use of force was reasonable to protect themselves and the public.

The deputies and officers at the standoff had the mental health training required by state law through CLEET, court records show. Husky and attorneys in Gary Clark's civil suit questioned whether it was enough or whether it was taken seriously.

During Gary's preliminary hearing in the criminal case, Husky asked Dorr whether it makes a difference when a call comes in that the person in question is a mental-health patient. Dorr replied that it does not.

"Then what's the purpose of the mental health ... training that CLEET does?" Husky asked.

"I don't know. You know, he's committed a crime, he's standing there, he's armed and barricaded," Dorr replied. "It doesn't matter to me if he's mental health or not."