Rangers get their first conference of the season 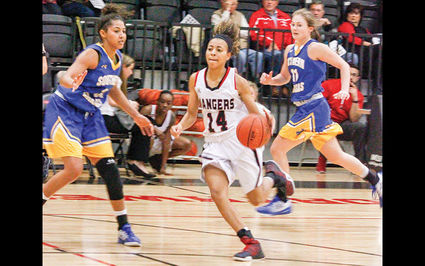 Freshman Ashlie Robinson (14) weaves through traffic and drives hard through the paint to get the fastbreak layup.

The Northwestern Oklahoma State women's basketball team hosted their first conference game at Percefull Fieldhouse on Thursday evening as they faced off with Southern Arkansas University in an impressive outing.

Though Southern Arkansas was the first with points on the board for the early lead with a foul shot from Kimberly Crown and a layup from Demi Read, that lead didn't last long. The Rangers responded with a three-pointer from Kori Barrios to tie the game up at 3-3 just over a minute into the first quarter. Northwestern followed with another three from Taylor Cell to take their first l...