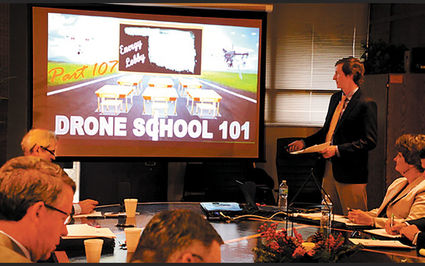 Oklahoma City, Oklahoma – The energy lobby, as well as friends from the utility sector, were called into class Thursday by the state Aeronautics Commission to decode Part 107 rules recently released by the Federal Aviation Administration (FAA).

The class, taught by Grayson Ardies, who heads up the airport division for the Oklahoma Aeronautics Commission (OAC), explained how Part 107 rules now affect the energy and utility companies across the state. The reasoning behind Drone School 101 comes after OAC requested a bill through the offices of Senator Frank Simpson, (R) Ardmore and Representative Pat Ownbey, (R) Ardmore. The southern Oklahoma duo is preparing legislation to foster growth in the emerging industry of Unmanned Aerial Systems (UAS), and nearly every industry and public entity could be affected by the legislative outcome, yet they must balance that with the interests of property owners, communities and safety.

"Drone School 101 is a concept of our communications and legislative affairs director, Sandra Shelton, and when she came to me with the idea, I had concerns. The Part 107 rules can be overwhelming and difficult to decipher for those without an aviation background, but the dialogue among our Capitol colleagues today was incredible. I would call it a win for UAS and the energy and utility companies operating in Oklahoma," said Victor Bird, director of OAC.

Shelton began working for OAC in April of this year and holds a combined twenty years of legislative experience working for Oklahoma's State House and Senate and for both political parties. "Lobbyist's often are the eyes and ears of the legislative process, and they represent companies who represent people. The professionals here today were good students and were very attentive. We want the language coming forth regarding UAS to be all-inclusive and industry stimulating while protecting privacy and safety for Oklahomans. We need the input of those companies doing business in our communities," said Shelton.

The Oklahoma Municipal League hosted the event at their headquarters and Director of Government Relations/Membership Services Missy Dean said, "This is a great way for a state agency to approach a statutory change or new law. Our cities and towns will be affected by drone legislation, and we need to be at the table. We were pleased to host the event."

Simpson and Ownbey attended the meeting, and Simpson stated, "This was the first of a few Drone School 101 meetings. We intend to meet with state public safety, law enforcement, and judicial agencies. We have vetted this legislation more thoroughly than an average bill gets. I personally conducted a Senate Interim Study regarding UAS only months ago and attended the drone symposium held in Norman this past summer."

Ownbey expressed similar sentiment by saying, "I think we will get a good piece of legislation for the Governor's consideration because OAC has done their homework. They have reached out to unmanned aircraft operators and industry, and they are leading the charge for meaningful UAS lawmaking."

Discussions regarding licensure and UAS use for power lines, pipe lines and cell tower examinations were the most talked about, and the group as a whole felt certain common goals would prevail. Jeff Applekamp, with Enable Midstream, summarized "Before today I wasn't aware of just how much UAS laws could affect our company. I learned a great deal from OAC and their team."

UAS legislation is in the drafting process through Simpson's office and the bill filing deadline for the Oklahoma State Senate is January 19. For more information about FAA Part 107 visit their website at http://www.faa.gov/UAS.