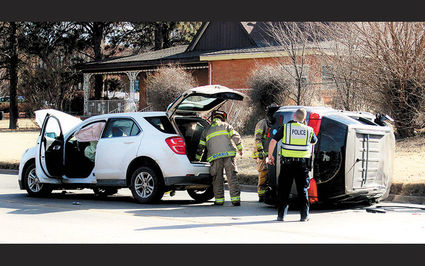 One driver was taken to the hospital following this wreck on Jan. 12 at Oklahoma Boulevard and Ninth Street. Terrence Turner of Alva was driving the vehicle, which flipped on its side after impacting the curb. He refused medical treatment. Jordan Ross of Alva was in the other vehicle and was taken to Share Medical.

Even though one vehicle was flipped on its side, the driver said he didn't required medical attention in a two-vehicle collision on Thursday, Jan. 12, in Alva. The collision occurred at 1:20 p.m. on Oklahoma Boulevard at Ninth Street. However the other driver was taken to the hospital.

According to the police report, Terrence Earl Turner, 83, of Alva in a 2012 GMC was driving north on Ninth Street. Turner said he stopped at the stop sign at the intersection. He did not see anyone coming so began to turn east onto Oklahoma Boulevard.

Jordan Ashley Ross, 29, of Alva was traveling east on Okl...