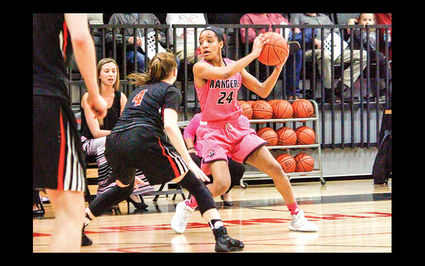 Deja Beechum (24) swings the ball around the perimeter as the Lady Rangers search for the open shot.

The Northwestern Oklahoma State's woman's basketball team was defeated by a final score of 67-56 in Thursday night's contest with East Central University.

The Lady Rangers were unable to build any momentum in the second half after starting out the game ahead by a score of 20-to-8. Hammon, Oklahoma, native Kori Barrios led the way for the Lady Rangers with 16 points as well as four rebounds. Junior Kalea King continued her stellar season with 15 points and six rebounds.

Statistically the game was pretty even, despite the Lady Tigers impressive shooting performance. After a rough first quarte...