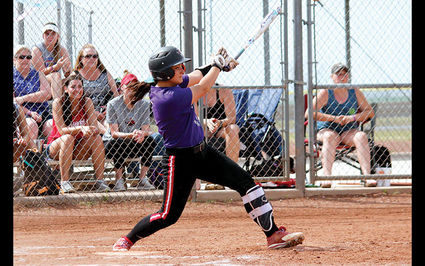 Audrey Estes hits a single shallow line drive to the outfield to score a runner across home in the Rangers' rally in the third inning.

ALVA, Okla. – Northwestern Softball was back in action against Southern Nazarene University on Friday in what turned out to be a low scoring afternoon. Northwestern managed to keep their footing in the Great American Conference standings by earning a doubleheader split while dropping the first game 2-0. The two high-powered offenses combined for just seven runs over two games, with the Rangers using a pair of home runs to take game two 3-2.

Beginning an important GAC series in their quest for a conference tournament berth, the Rangers welcomed the Crimson Storm for the first of a four game set at the Alva Recreation Complex. But Northwestern ran into a great performance from pitcher Katelyn Brown, who was in search of her 10th win on the year.

Brown kept the Ranger batters off balance all afternoon as they struggled to get their timing down against the junior right hander, who sat down five Northwestern hitters in her first three innings.

Madison Garza was in the circle for Jill Webb's Rangers, having won each of her last four starts to improve her record to 7-10 this season. Garza battled through the wind Friday, keeping the Crimson Storm offense relatively quiet except for one game-changing swing of the bat.

Freshman slugger Mahina Sauer sent one into the jet stream in the top of the third for a two-run shot to open the scoring for the Crimson Storm. The big fly provided all the runs Brown would need as she held the Rangers to just three hits and three walks in the ballgame. The black-and-red had a chance to make things interesting in the fifth inning when they had two runners on, but one of Brown's seven strikeouts ended the threat.

Right hander Karly Murray toed the rubber in the back end of the doubleheader with hopes of leading the Rangers to a split on the day. She got some early help in the form of a solo shot off the bat of senior Megan Sanders for her fifth home run. But the lead was short lived as Southern Nazarene answered back in the next inning.

After a questionable hit by pitch call with two outs in the bottom of the third, SNU second baseman Jacey James drove a ball over the wall in left to give the visitors a 2-1 lead. But the Rangers 'never say never' attitude was on display as they rallied in the fourth to get themselves back in it.

Macy Madewell (1-for-3, 2 RBI) handed the Crimson Storm a decisive blow in the fourth when she hit a two-run home run of her own, giving the Black and Red a 3-2 advantage. The Rangers had another chance in the sixth to tack on a few more insurance runs, but a ground out would leave Sanders and Madewell stranded to end the inning. 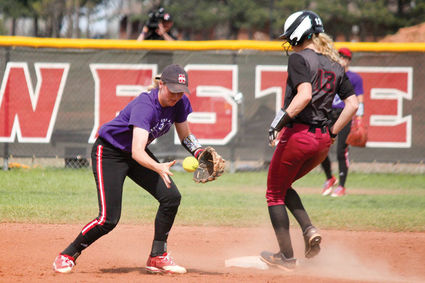 Shortstop Madi Parott (pictured left) comes to second to get the throw-down to catch the steal, but the throw is just wide left.

Lowering her ERA to a 4.63, Murray breezed through the top of the seventh to secure her sixth victory of 2017, recording nine strikeouts in the win while only allowing four hits and two earned runs.

Northwestern Oklahoma State Softball was back in action Saturday when they went for the series win against Southern Nazarene in a noon doubleheader at the Alva Recreation Complex. Both Northwestern and Southern Nazarene took part in the "Defending Home Against Domestic Violence" initiative during Saturday afternoon's contests. The Rangers sported purple T-shirts, purple laces and teal ribbons to support the cause and hosted a booth with information on the sensitive subject of domestic violence. The booth also sold T-shirts in support of breaking the cycle of domestic violence and the first responders who respond on domestic violence calls.