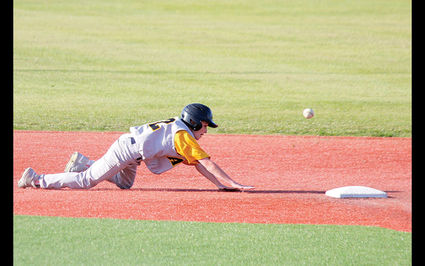 Colby Mackey, courtesy runner for Kory Faulkner, slides back to second base to avoid the tagout from the throw-down.

The Alva Middle School Goldbugs baseball team hosted the Blackwell Maroons for a five inning matchup and Myers Stadium that ended in a run-rule in Alva's favor.

Kaden Slater put a great performance as the starting pitcher on the mound, pitching for 3.0 innings for the Goldbugs allowing just two runs off one hit. Slater started that first inning taking down the first three batters for the Maroons with three straight strikeouts to put Alva at the bats.

Though Blackwell got two quick outs in the Goldbugs' turn at-bat, with two outs and a runner on first, Kory Faulkner hit a shallow flyball to...