Goldbugs fall in doubleheader against Liberal on Saturday 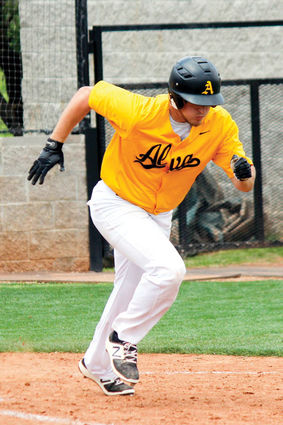 Chase Jones takes off after hitting a ground ball to second base, but was able to outrun the throw for a single.

The Alva High School Goldbugs baseball team hosted the Redskins out of Liberal, Kansas, on Saturday starting at Noon in back-to-back seven innings.

It was a low-scoring seven innings to start the day as both teams held strong on defense, but the Redskins broke through on the bats in the top of the fourth.

Though Liberal got their first hit in the top of the second, they didn't score their first two runs till the fourth. With one out and runners on third and second, the Redskins' batter hit a deep flyball to rightfielder Zeth Warren. Though Warren got the routine out, that turned in...