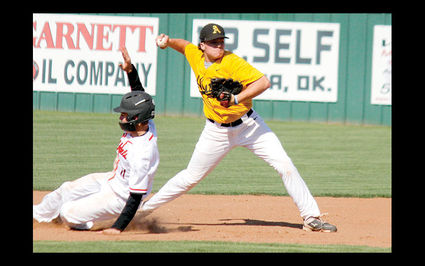 Shortstop Stanton Earnest gets the throw from T.W. Beiswanger for the force out at second, then throws the runner out at first to turn the double play.

After getting a big victory on the road against Watonga Tuesday, the Alva High School Goldbugs baseball team hosted the Fairview Yellow Jackets for their final home of the regular season.

Alva had a slow start against the Jackets as the two teams remained scoreless for the first two innings of the matchup. But the Goldbugs quickly turned the tide in their favor in the third as they rallied big to get a commanding lead.

As the Goldbugs went to bat for the third time that afternoon, it looked like Fairview would close out another quick inning as they go two quick outs to start Alva's turn at...