Goldbugs Baseball ends with fall in Game 3 of district championship 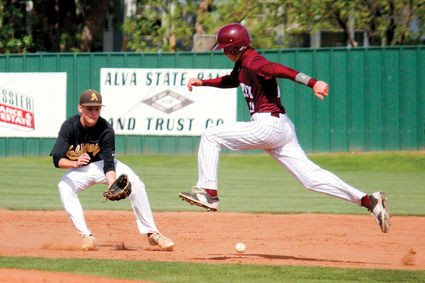 Second baseman Jacob Faulkner (2) fields the ground ball and throws the runner out at first for the routine ground out against the Perry Maroons.

Though the Alva High School Goldbugs baseball team hosted the Perry Maroons for Class 3A District Championship, it was a tough three-game battle that ended in a loss for the Goldbugs as they ended their season with an overall record of 19-13.

The Goldbugs trailed early, as the Maroons picked up the lead in the top of the first off a two-out fly ball to left field to score a runner from third.

After Perry scored another run in the second, both teams went scoreless for four innings before the Maroons rallied for a big finish. Perry closed out their final turn at bat with a four-run...