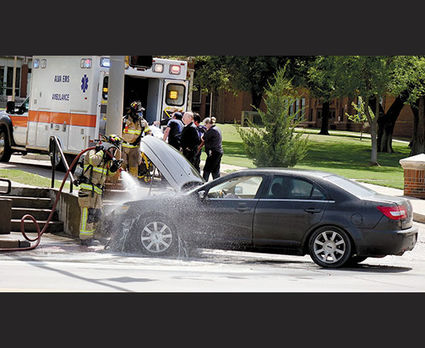 Tomas Diego of Alva is loaded into an ambulance by emergency personnel Monday, April 24. He was driving this 2006 Lincoln on Oklahoma Boulevard when it struck a retaining wall in front of the Northwestern Oklahoma State University campus. Diego faces charges in Woods County District Court.

A man trying to make a turn onto Oklahoma Boulevard struck a retaining wall on Monday, April 24, in Alva. The car engine caught on fire, the driver was taken to the hospital and he now faces charges in Woods County Court.

Tomas Diego, 24, of Alva has been charged with unauthorized use of a vehicle, a felony. The crime is punishable by a fine of $500 to $5,000 or imprisonment for one to five years, or both.

In addition Diego has been charged with a misdemeanor of person involved in personal injury accident while under the influence of alcohol or intoxicating liquor. That charge carries a pu...