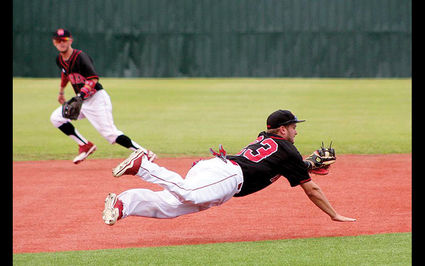 Third baseman Steven Deckard (23) dives for the ground ball to throw the runner out at first.

Senior Thomas Sander took the mound in Game One of the day and was fantastic in his outing, going 7.2 innings, surrendering just two hits and three runs.

Pat Delano and TJ Kassner tore it up at the plate in the first of the twinbill, going 2-for-3, helping the Rangers to the win.