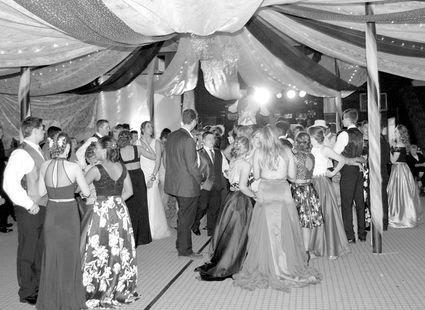 Alva students and their dates enjoy a night "Under the Stars."

On Saturday, April 22, Alva High School held their prom. The theme for this year's prom was "Under the Stars." The theme is always voted on by the senior class, after they are presented with three options for a theme from the junior class.

Prom was held in downtown Alva at the eXtreme. Promenade was emceed by AHS Sophomore Trey Bogdanovecz. Students got very creative with what they drove to promenade. Students arrived in things like a fire truck, a tractor, and a horse-drawn carriage. This year something new was added, and a dinner was held after promenade. The dinner was catered by Klein's Catering, out of Perry. Overall, the dinner was a huge success, according to all of the AHS students.

Every year the junior class is responsible for providing the funds and decorations for prom. The junior class began fundraising in 2014, during their freshman year. They began decorating for prom on Wednesday, April 19.

There are two class sponsors who are mainly responsible for helping the students put on prom. This year those teachers were Misty Beiswanger and Kylee Pfleider.

Stewart said, "It was an interesting process; it wouldn't have been possible without Mrs. Beiswanger and Mrs. Pfleider, and all the juniors who helped decorate. I'm very pleased with how prom worked out, and I thought the dinner was a huge hit."

Every year, prom is something the students at Alva High School look forward to tremendously. This year was no exception. The night was filled with dancing, laughing and having fun with friends. Boss Music deejayed the event, and they were a huge part of why prom was such a success.

"Prom was so much fun," said AHS senior Mattie Duncan. "The junior class did a great job with the decorations; they were awesome. It was such a fun night!"

Another aspect of prom night is the after-prom. After-prom is held at the recreational center in Alva. It lasted from 11:45 p.m. to 5 a.m. It is sponsored by the junior and senior parents. After-prom is great because it allows the students to go have a good time after prom, while still being in a safe environment. This year at after-prom there were inflatable blow up toys, dodgeball, basketball and a hypnotist. Also, The Vanilla Bean provided a free all-night coffee bar. For the past few years, the hypnotist has been a favorite part of after prom for everyone. This year a group of 15 upperclassmen were hypnotised.

"I had such a good time at after-prom," said AHS junior Hannah O'Neil. "I loved playing dodgeball and watching the hypnotist show!"