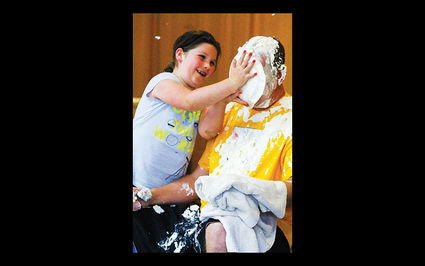 Jalee Hembree, Longfellow Elementary student, delights in sending a pie to Principal Steve Shiever's face as her reward for earning $150-plus during Longfellow's Spell-a-Thon Awards on May 5.

Longfellow Elementary School students had something to look forward to last week that most students don't get the pleasure of doing: "pieing" their principal in the face.

Students were awarded the opportunity to throw a pie in Principal Steve Shiever's face if they earned $150 or more during the school's Spell-a-Thon event.

Shiever received 51 pies in the face during the event.

Each class and each student compet...