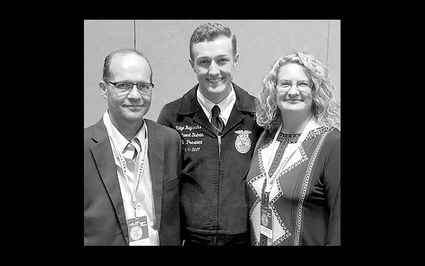 "My legs went limp, they slapped on that jacket and my friends held me up," Kyle Hughbanks said of the moment his name was announced as the Oklahoma State FFA president at convention last week held in the Cox Convention Center at Oklahoma City.

Naming of the state FFA president is the last order of business at the Oklahoma State FFA Convention with music blasting and lights dancing as the excitement mounts.

"It was an incredible experience," the 2016 Alva High School graduate said. "Words cannot describe the feeling I had. It's not just about me – it's about our community. I've always ha...