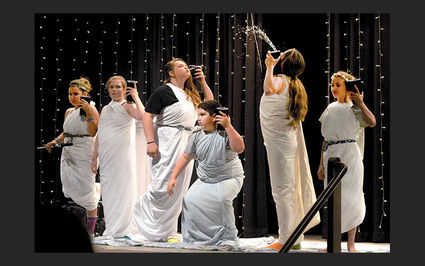 The winner of the class skit category was the seventh-grade presentation of "The Greek Fountains." The production included six students who were dressed in togas and sandals and emulated Greek fountains. Moving gracefully to music Enya's "Only Time," (from left) Hannah Duke, Kaitlynn Rhodes, Jaci Weber, Derrick Galindo, Ariana White and Dreama Jones eloquently spit water at one another in their imitation of Greek fountains.

Each age division had at least one classroom skit. The third through fourth grade group did "Basketball versus Trolls," seventh grade performed "Greek Fountains" and 10th graders ma...