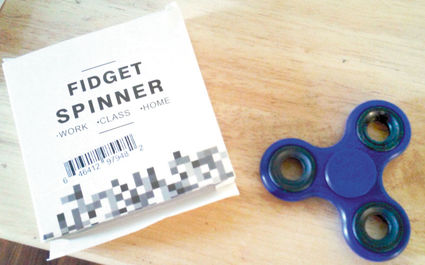 Are you a fidgeter? Do you find yourself tapping your fingers to the Lone Ranger theme song? Shaking your leg incessantly to the point others around you think it might be an earthquake? Doodling graffiti in the margins of your notebook while trying to listen to an important lecture?

I find myself doing any one of these things on occasion. Experts say some kids, teens and adults have a need to release pent-up energy if they have been diagnosed with attention deficit hyperactive disorder (ADHD), anxiety or autism. As a teacher I am all for something that can help a child stay focused on a lesson. But school districts across the nation are banning these therapeutic tools from the classroom.

For me, a person who has moments of ADD, I find the Spinner stimulating and a bit spellbinding. I've had it over three weeks and find myself picking it up while I'm watching TV. The simple toy fascinates me as I place it between my thumb and forefinger and spin it. The smoothness of the spin entices me to try and spin it faster, balance it on a finger or, like a spinning basketball, see if I can float it from one finger to another. I have not mastered any of these tricks but I bet if I look on YouTube someone has also made attempts and maybe perfected some moves.

Spinners originated in 1997 as a device to promote peace. The idea began when the inventor, Catherine Hettinger, noticed two boys throwing rocks at police officers while in Israel. She wanted to offer something as a distraction in order to pacify hyperactivity and soothe the energy within.

She began imagining toys that could do the job, like maybe a soft rock for kids to throw. Instead she envisioned the spinner and, ten years later, Hettinger pitched her idea to Hasbro Toy Company but was turned down.

At the beginning of this year, her patent ran out and Hasbro was free to produce similar designs. Today we have spinners flying off shelves of the retail industry throughout America. Some say it's a fad that will run its course. Do you remember the gyro? The Rubik's cube? Silly putty? Someone posted on Facebook from Kingsport Humor "The Original Spinner." Once the page is open a scene from an old time western movie shows a cowboy handling his pistol like Wild Bill Hitchcock. (I thought it was funny.)

Some professionals say that fidget spinners can benefit a student who has pent-up energy, that using it is a way to release their energy without disrupting others. Based on what I have read, the spinner is helpful for some students who have a fidgeting problem. However, the problem is that the spinner is offered to the general public and those who buy it without a therapeutic need for it play with it. There's nothing wrong with that, but there is a time to play and a time to be still and listen. What is soothing to some is a distraction to others.

Perhaps if we put things in perspective. For example, say an individual needs a wheelchair to get around and function in a classroom or work setting. No one would take away a person's wheelchair. But what if a person who doesn't need the assistance of a wheelchair would use one to play wheelchair games while trying to learn algebra in the classroom?

I'm not trying to say people in wheelchairs don't have fun and live dull lives. I'm trying to say that people with two functioning limbs can't appreciate the accommodation of a wheelchair. The same goes with the spinner. Whether it's a toy for some or a therapeutic tool for others, if it helps an energetic 10-year-old stay calm and focus during an algebra lesson – spin on.