Hamil sisters home after injuries from wreck May 31 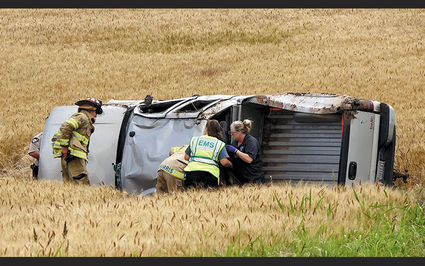 The Alva Fire Department works to free MaKale Hamil from a 2005 GMC pickup following a wreck west of Alva Wednesday afternoon as Alva EMS personnel check on her. MaKale and her sister MaKenzi were flown to OU Medical in OKlahoma City. Three members of the Galindo family from Freedom received minor injuries in the accident.

Two Alva girls were seriously injured in a one-vehicle wreck west of Alva Wednesday afternoon, May 31. MaKale Hamil, 11, and MaKenzi Hamil, 9, were transported by Alva EMS to Share Medical Center in Alva and then flown by Air Evac to OU Medical in Oklahoma City. The girls are the daughters of Clay and Tasha Hamil of Alva. Both girls were admitted in stable condition, MaKale with injuries to her legs and MaKenzi with trunk internal and trunk external injuries.