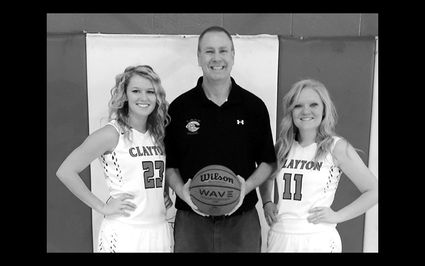 Coach Michael Schnatz is pictured with two of his players from this past season's Clayton girls basketball team.

Eighteen-year coaching veteran Michael Schnatz confirmed to the Freedom Call that he will be the new coach at Freedom schools for the 2017-2018 school year. The majority of his coaching experience has been with small Oklahoma schools.

A self-defined Army brat, Schnatz following the family tradition and enlisted right out of high school and joined the Army for a three-year tour of duty, which included a stint in the first Persian Gulf War.

After that, he graduated from Southern Nazarene University with a bachelor of science in kinesiology.

He began his coaching career at Guymon as junior high basketball coach and swim coach. He later moved to Ulysses, Kansas, for his first experience as a varsity basketball coach. After several years in western Oklahoma and Kansas, Schnatz chose to coach at schools in Missouri so he could be closer to his family.

In 2008, Schnatz took a position in Bluejacket, Oklahoma, as the girls and boys high school and junior high basketball coach and assistant football coach. In six years at Bluejacket, he took a nearly non-existent basketball program and turned it around to winning seasons with frequent post-season area tournament appearances.

More recently, in two seasons Coach Schnatz took the Clayton girls basketball team from winning only one game the prior season to a winning season, which included a consolation tournament trophy, two first-place tournament trophies and a district championship.

He also initiated a cross-country and a track program at Clayton High School that resulted in 11 students competing at the Class A Oklahoma State Track meet in 2017.

Schnatz said that since he is not married, he tends to invest a lot of time with his students and loves to see them improve, grow and succeed.

"I am looking forward to the experience of coaching at Freedom, OK," he said.