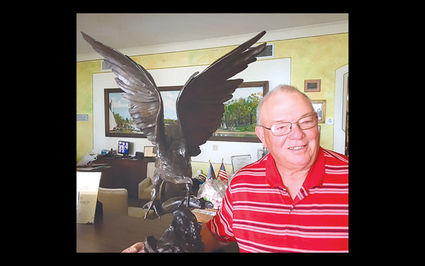 Verne Metcalf holds one of over 40 bald eagle statues he donated to the Cherokee Strip Museum. This sculpture was recast from an original mold using the Lost Wax Method titled "The Eagle."

Verne Metcalf, long time Alva pharmacist, recently donated his bald eagle collection to the Cherokee Strip Museum. When Verne came to Alva, he worked for Schuhmacher Drug from 1975 until 1994 He then worked at the Walmart pharmacy from 1994 until 2000 and then Holders Drug became his home from 2000 until his retirement in 2013.

Verne and his wife Gloria have been traveling extensively since their retirement and have many more places to see and do.

Verne has always been interested in eagles. He has studied and admired them for many years. He would go over to the Salt Plains and watch these...