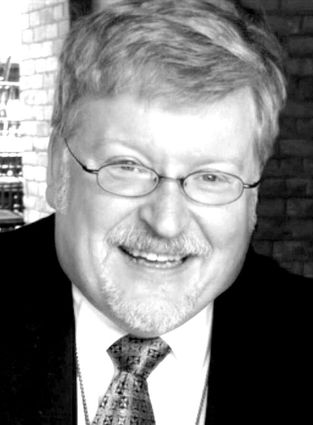 Reverend JF Wickey III passed away Friday, June 9, 2017, at his home in Alva, Oklahoma, after a short but severe illness. He was 59 years young. Preceding him in death were his grandparents John M. Sims and Mildred Kincaid-Sims, also of Alva, and his grandparents Helene Lee and John F. Wickey of St. Louis, Missouri. He is survived by his parents John F. and Patricia Wickey, his sister Janet Wickey-Spence and her husband Luke (all of Webster Groves, Missouri), and his fiancé and best friend Nikolay Il'yin.

JF graduated from Riverview Gardens High School in St. Louis, Missouri. He obtained a B.S. in applied mathematics from the University of Houston, a masters in theology from Eden Seminary in Webster Groves, Missouri, and studied for a PhD in theology at Brite Divinity School–TCU in Fort Worth, Texas. He also studied at Cambridge in the UK for a short time. JF had the privilege of studying under the tutelage of the Rev. Dr. Peggy Way, who became his mentor and dear friend while at Eden Seminary where they spent hours upon hours talking about "Joy" and clinical pastoral care.

JF was a brilliant and well-read man and was known to read at least four to five books a week, a trait he inherited from his father. As a boy and young man JF was an Eagle Scout and a founding member of the Order of the Arrow. He took trips to Philmont Scout Ranch and a canoeing trip to Canada.

JF loved theatre and all forms of music. He loved Star Trek, Star Wars and all science fiction and fantasy and movies of all genres. A favorite pastime was attending the Renaissance Festival in Texas. JF was also a founding member of the Enid LGBT Coalition and president of the Alva Monday Night Supper Club. He was also actively involved with the Woods County Democrats.

Rev. JF leaves behind numerous family members, friends, fellow pastors and an accepting and loving community in Alva where he accomplished his mission of caring for others. JF helped many people work through the grief of losing a loved one. He cared for the young as well as the elderly and was always concerned about others who felt or did not know they always had a place at the Lord's Table. JF loved all colors of the rainbow. He loved everything to the full measure of his heart. JF believed Jesus' message was clear: Love One Another, Feed the Hungry, and Clothe the Poor. JF especially believed in building the community by sitting down and sharing a meal. He loved to cook and as a small child watched every episode of the "Galloping Gourmet" with Graham Kerr and "The French Chef" with Julia Child on TV. His impression of Julia was "spot on."

A memorial service for JF will be held in Alva on Wednesday, June 14, 2017, at the First Presbyterian Church starting at 4 p.m. with Reverend Carolyn Murrow officiating. A dinner will be served after. In lieu of flowers donations may be made to the Enid LBGT Coalition (http://enidlgbtcoalition.org/) to celebrate a broader acceptance and diversity of all individuals, for this is the way of the Lord. JF was truly loved and respected by a great many people all over the world.

The Wickey family would especially like to thank JF's dear friend Dr. Aaron Place, a professor at NWOSU, who was with JF when he passed and his wife Erin Place; also, dear friends Rev. Dr. Judye Pistole, Rev. Carolyn Murrow and the Stanley Almgren family who provided years of friendship and family support. We are grateful for the love you shared with JF.

A second memorial service will be held in St. Louis, Missouri, at a later date.

Ask yourself every day, "How did I see God today?"