Goldbugs baseball off to a great start in the tournament 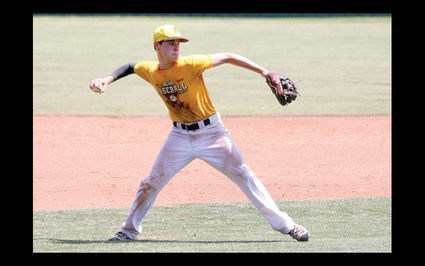 Third baseman Morgan Cook fields a soft ground ball to get the routine out at first.

The Alva High School Goldbugs baseball team is hosting a tournament with five other teams competing, and the Goldbugs are off to a 3-0 start, kicking off the tournament Friday in the first game, against the Timberlake Tigers.

Alva jumped out to an early lead over the Tigers, picking up a dominating lead in the first three innings and giving up only two runs in the bottom of the third.

Zeth Warren led off the Goldbugs at the plate, and picked up the first hit of the day when he singled on a pop fly to shortstop. Dalton Rose was able to bring Warren in after hitting a hard ground bal...