City of Alva has clean audit 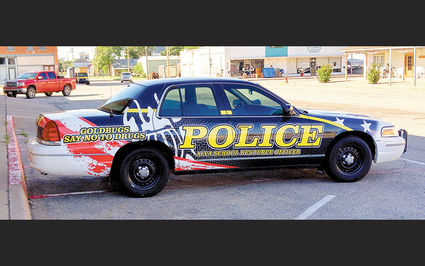 Auditor Chris Angel of Angel, Johnson & Blasingame, P.C. spoke to the Alva City Council Monday about the results of the audit for fiscal year 2015-2016. It was a "clean audit" with only a few minor problems. He praised the cooperation of the office staff and said they had no real disputes.

Angel mentioned the approximate 20 percent decline in sales tax revenue over the year, going from $1.3 million in the general fund to $782,000 by year's end. The Alva Utility Authority also experienced a revenue decline from $1.6 million at the start to $1.1 million at the end of the year.

Angel said a few purchase orders were dated after the invoice date. In one case no original invoice was found, but a quote was found for verification. He said the amount of these was not excessive.

He did suggest some tightening up on cash. It is recommended that cash received be deposited no later than the following day. He was concerned with cash collections for utilities and the police department. He said the city should establish someone to review cash written down each day and sign off on it. Also there should be an end of month review of all adjustments made.

He said the airport neglected to do an end of year inventory of fuel on hand to make sure all sales were reported.

These items were minor, Angel said. He recommended the city just "close up the systems a little bit."

A little later in the meeting, the council approved hiring Angel, Johnson & Blasingame, P.C. for an amount not to exceed $19,850 to audit the 2016-2017 fiscal year. The amount is the same as the previous year.

As city council members entered the municipal building Monday, they saw an eye-catching vehicle parked outside. The brightly decorated ride will be used by the city's school resource officer. Alva has one full time and one part time police officer assigned to the Alva Public Schools and Northwest Technology.

The vehicle is a donation from the Woods County Sheriff's Office. If it should no longer be needed, it will be returned to Woods County.

City Business Manager Joe Don Dunham said the colorful "wrapping" of the vehicle was paid for jointly by the school and the city. He said he thought they were given a good deal on the price too.

Dunham Nominated to Retirement Board

The person from Watonga currently representing District 8 (northwest Oklahoma) on the Oklahoma Municipal Retirement Fund board has decided not to seek that position again. Dunham has been suggested as a candidate for that position and expressed his willingness to serve. He said the position would require him to make some trips to attend meetings, but he didn't see it as conflicting with his work for the city.

The council voted to approve a resolution nominating him for a five year term. This will make him a candidate in the election.

Council members approved a budget amendment recognizing $6,400 grant from the National Rifle Association Foundation to make improvements to the Alva Public Gun Range. The grant will assist in upgrading security at the range and help in building some trap shooting stations. Dunham said the grant will not pay all the costs for the projects but will be a good start.

In another financial action, the council voted their annual approval of the city's investment policy.

Earlier the Alva Hospital Authority worked extensively to prepare an application to administer a UPL or Upper Payment Limit program for nursing homes. The federal program offers financial advantages to both the administrator and the nursing homes. However, the hospital did not fit the requirements of the program.

Instead, the City of Alva is now seeking that approval. Monday the city council voted to instruct Dunham to work with legal counsel to develop contracts, financing alternatives and start negotiations with nursing homes to participate the the Upper Payment Limit Supplemental Payment Program.

Dunham told the council he had already made an appointment with an attorney in Oklahoma City in anticipation of approval. He said the attorney is considered the expert in the state on UPLs.

Share Medical Center CFO Kevin O'Brien was at the meeting in case the council had questions. He has been working with the council's finance committee on the project.

With an eye on the long agenda, the council sped through the eight items dealing with Mayor Kelly Parker's appointments to boards and commissions. Council members were disappointed with City Attorney Rick Cunningham's insistence that each item have a separate vote.

Those approved for appointments were:

• Dale Logsdon re-appointed for a five year term to the Alva Airport Commission.

• Halah Simon re-appointed for a three year term to the Alva Board of Adjustment.

• Jerrad Hada appointed for a three year term to the Alva Board of Adjustment replacing Len Reed.

• Lisa Kohlmeier appointed for a three year term to the Alva Board of Adjustment replacing Paul Barton.

• Lynda Martin re-appointed for a six year term to the Alva Cemetery Board.

• David Kovarovic re-appointed for a three year term to the Alva Library Board.

• Len Reed re-appointed for a three year term to the Alva Library Board.

• Matt Adair re-appointed for a three year term to the Alva Planning Commission.

All those appointed have terms beginning July 1. Mayor Parker said he's still firming up one position on the Alva Planning Commission.

The council approved renewal of the contract for workers compensation insurance in the amount of $141,012. That's down about $9,000 from last year.

Following an executive session, the council returned to open session and approved a contract for fiscal year 2017-1018 with IAFF Local 3782, the Alva firefighters' union.

All members of the council were present with the exception of Mary Hamilton. Councilmember Brandon Sherman suggested prayers for the Hamilton family. He said Mary had spent the past two weeks with her husband who is in the hospital.

Sherman also commended the Gulp and Gallop lunch program for children in Alva which ended last week. Mayor Parker said he accompanied the group when they toured The Menagerie.

Councilmember Bryce Benson reported the Kids and Cops Pack the Park day went well although they'd hoped for a larger turnout. He also commended Alva Fire Marshall Bryan Miller for handling the successful application for the Share Trust grant for the fire structure.