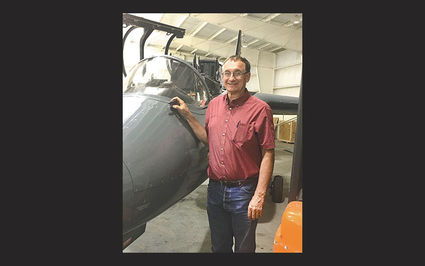 The skies around the Alva Regional Airport were much busier Saturday morning, June 17, as the Kinzie family held their fourth fly-in breakfast of the year. A fly-in is an excuse for many pilots to make a cross-country airplane trip to keep their flying skills fresh and get a breakfast at the same time. Typically 35-50 people gather on the third Saturday of the month between March and October for Alva's fly-in breakfast.

Many of Alva's pilots attended and arrived by vehicle, including Dale Logsdon, Terry Cline, Max McDermott, Jim Hodgson and Bob Baker. Even though they came by land, the amusing anecdotes are enjoyed both by locals and visitors.

Many pilots not only fly planes, but possess the skills to build them as well.

Local aviation mechanic Dale Logsdon has the best of both worlds. As a part-time mechanic, he continuously builds and modifies planes for himself, while getting paid to do the same thing for local pilots as he keeps their planes flying.

Former air force comrade Terry Cline is in the process of building an RV14 for his next plane. He described the RV14 as a smaller aircraft and the "premier experimental home-built export."

Cline received his first flying lesson during his time in the Air Force in an F4 from a German Exchange officer. The German officer who "spoke very poor English, but decent for a German," taught Cline how to fly an F4 in one lesson, but he informed Cline that it would take another "25 hours" to teach him how to land.

Max McDermott is currently between planes, but his favorite is an RV4; it is a "hot rod." He admires the plane for its high performance qualities and its durability.

McDermott is the man who caused "the accident that never happened." While flying a friend's plane back from Texas "everything started going bad." He lost all of his electrical systems. Luckily everyone knew his destination was Alva. Even though he arrived safely, he had a warm welcome from the fire department, police and ambulance crew.

Aviators can form such a bond with their plane that loyalty and faithfulness for that original plane never breaks.

Jim Hodgson, 79 years old, aviates a Cessna 172 and has had that very plane since he learned how to fly in 1977. Through mist, rain and ice, Jim and that very plane have endured it all, but miraculously still remain in one piece.

Aviation enthusiasts enjoy and respect all aircraft, but some enjoy owning different types.

Bob Baker enjoys flying his Marchetti for its fast, responsive characteristics. It is an Italian light aircraft promoted as an aerobatics and military trainer.

Some of the pilots who flew in for the breakfast were Jim Doran from St. Johns, Kansas; Roger Summars and Eric Summars from Buffalo, Oklahoma; and Gary Trimpe from Pratt, Kansas.

The pilots all arrived in various different types of airplanes. As Doran expressed, and most men would agree, his favorite place to fly is "anywhere for breakfast."

Doran flies a Moll and a V-Tail Bonanza. His favorite to fly is the Moll because it is much more versatile and an aircraft for flying slow and low. He recently flew to Kitty Hawk where the Wright Brothers flew first. With incredible enthusiasm he described it as a "unique experience" that he would always remember, "landing where flight began."

Doran enjoys flying and camping under his plane's protective wing. He flies in the backcountry and over the mountains of Idaho, Montana, and Colorado. And he will never forget the time he had an encounter with a black bear on the runway; luckily he was in his plane ready for takeoff.

Father and son Roger and Eric Summars traveled to the breakfast in a Piper Cherokee. The family enjoys the Piper Cherokee for its ease of flying and its landing capabilities; Eric explained "Cherokee is what we fly and that is the one we will continue to fly."

Eric recalls a time when flying the Piper Cherokee was not that easy. Once he and his father were flying while Eric was still in training, and things did not go as smoothly as planned while practicing the new airman certification standards for flight. Roger put a lot of nose up trim in the airplane, causing the plane to be stuck in a nose upright position, which led the two men to reroute back to the airport, until the aviation mechanic could fix it the next day.

Gary Trimpe flew in a Van's RV6, a tail-dragger, which is known to possess light, reliable and predictable flight characteristics. He has been around planes since he was 14 years old, and at that age began to build gliders – behind his mother's back, of course.

Starting at such a young age, Trimpe has many years of experience in aviation. In fact, he lived in treacherous Alaska for four years. Three years there he was a flight instructor, teaching aviators in flying Ultralights. He worked on promoting flying to children through the Experimental Aircraft Association, to teach them the beauty and privilege of being an aviator.

These aviators might possess different tastes when it comes to types of airplanes, but their feelings while flying are mutual. Max McDermott described flying as "freedom." As Doran put it, "everything else goes away." It makes a person feel "superhuman."

Cline added that, "you are doing something that a lot of humans will never do, and what all humans have always wanted to do." Trimpe said flying is a privilege and should be encouraged.

Each individual has experienced thrilling incidents and each event required separate analytical problem-solving skills. Whether facing an electrical malfunction like McDermott has faced, engine failure like Hodgson has tackled, or a black bear scurrying past the runway during takeoff like Doran has encountered, each problem, minor or major, was worked out calmly and carefully by each pilot.

All of these pilots are more than just men with a common interest. They are family, brothers of the sky. 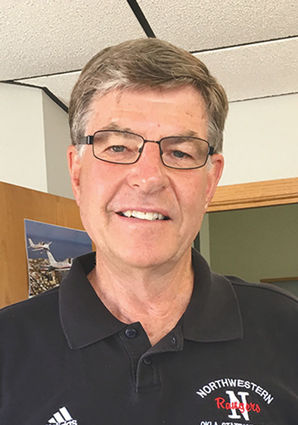