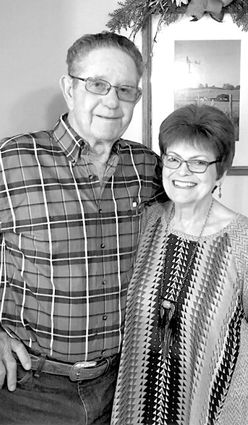 Mr. and Mrs. Boyce Elmore of Cherokee celebrated 60 years of marriage on June 28, 2017. In honor of their parents' anniversary, their daughters will be hosting a family celebration sometime in the near future. Boyce and Carol are long-time members of the First Baptist Church in Cherokee and love being a part of such a great community.

Boyce Duane Elmore and Carol Ann Needham were married June 28, 1957, at First Baptist Church in Alva. They both grew up in Alva and later moved to Cherokee where they raised their three daughters, Laurie Pelter and husband Monte of Cherokee, Lecia Hager and husband Riley of Bartlesville and LynnaBeth Means and husband Burton of Ponca City. 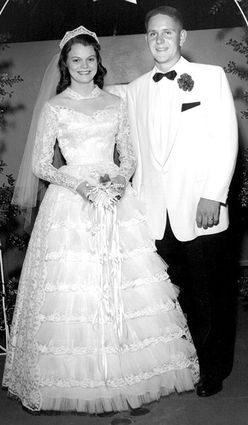 Boyce and Carol also have five grandsons, three great-grandsons, and one great-granddaughter: Matthew Pelter and Amanda Cseh of Oklahoma City, Michael and Ashley Pelter and their sons Elisha, Micah and Kohen of Shawnee, Brad Hager of Bartlesville, Dustin and Keli Means and their daughter Kylee of Stillwater and Andrew Means of Ponca City.

Boyce worked for Alfalfa Electric Cooperative for 36 years, and since his retirement has continued to farm and raise cattle at Elmore Ranch in Alva, where he was born and raised. Carol owned and operated Vic's Etc. in Cherokee. Vic's was known for gifts for the home, bridal registries, Yankee candles and the annual Christmas Open House with themed trees.

Please help us acknowledge them for this great accomplishment.