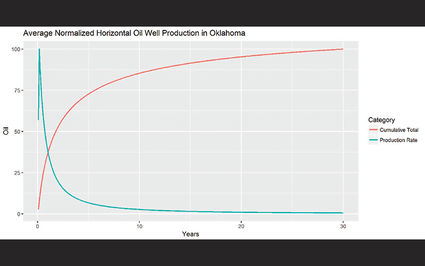 The blue lines show the sharp decline in average monthly production of oil and natural gas over the projected 30-year lifetime of new horizontal wells. The red lines depict the total amount of a well's lifetime production realized at various points in time. The curves are "normalized" so peak production is represented by a numerical value of 100, which usually occurs in the second month of a well's life. The charts were calculated using data obtained from the Oklahoma Tax Commission and analyzed by Oklahoma Watch and Wenzel Technology LLC.

An Oklahoma Watch analysis of more than 3,000 horizontal wells shows that more than half of a typical well's projected lifetime oil and gas production will occur during its first three years, when it is taxed at a much lower rate.

The analysis looks at all horizontal wells in the state that began production between February 2014 and January 2017. Oklahoma Watch obtained the data from the Oklahoma Tax Commission.