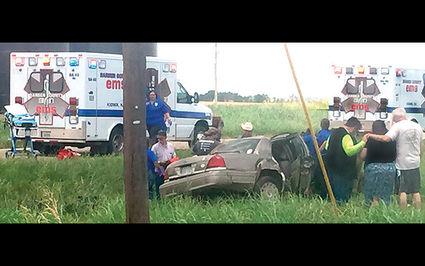 This was the scene on K2 Highway that goes through Hazelton, Kansas, Tuesday early afternoon. Emergency crews are at the scene to care for the driver. Locals at the Hazelton Co-op said they saw the accident happen in front of the service station. They said the driver of the car was Hazelton man Allen Babb who was westbound on the highway and it appeared he was going to turn into the service station. When Babb attempted to turn he reportedly pulled in front of an oncoming semi-truck. Babb was reportedly taken to the Kiowa District Hospital. His condition was unknown at press time. The KHP was called to the location and was still investigating; no details were yet available.