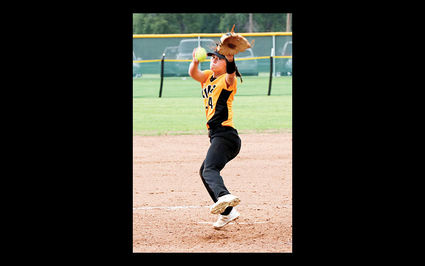 Hallie Durkee pitches all four innings against Fargo on Thursday in their 11-4 victory, giving Alva their third win in the Woodward Tournament.

Alva picked up an early run in the top of the first off a two-out homer over the center-field fence from Hallie Durkee that gave the Ladybugs the 1-0 lead.

From there, both defenses held strong until the top of the fourth when Alva plated two runners across home to take a three-run lead. After a fly-out to center field, Bianca Ruiz reached first off a ball four and Laney Ste...