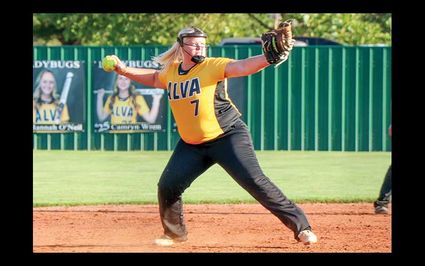 Third baseman Ali Harzman fields a soft grounder along the foul line and quickly throw the runner out at first.

The Alva High School Ladybugs hosted the Elk City Elkettes on Monday in a tough battle as they struggled to get the bats going at the plate.

The Ladybugs' defense held strong to start the top of the first against Elk City as they picked up two quick outs off a ground out to Alva's pitcher, Camryn Wren, followed by four-pitch strikeout. Just needing one out to send Alva to the dugout, Elk City responded with their first hit to left field followed by a walk to put two runners on base.

The Elkettes got their first run off an error from second baseman Hallie Durkee to bring the runner from seco...