Ladybugs fall behind early against the Lady Bearcats 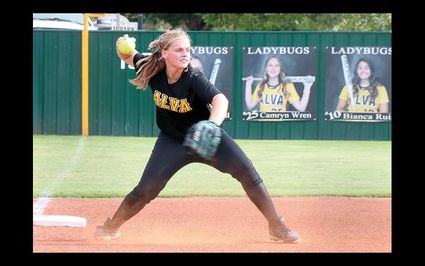 Third baseman Sammy Hawley fields the grounder and quickly throws the ball to first to try and get the hitter out.

The Alva Middle School Ladybugs softball team hosted their first home game of the season against a tough Mooreland team on Thursday at 4:30 p.m.

The Ladybugs struggled early as pitcher Hallie Hamilton faced a long day on the mound trying to find her rhythm. Though the Ladybugs got the lead-off hitter out on a pop-fly to shortstop Alaina Pierce, Mooreland followed that with a two-pitch homer over left field to plate two runs for the early lead. The Lady Bearcats scored two more runs in the top of the first to get the 0-4 lead over Alva. 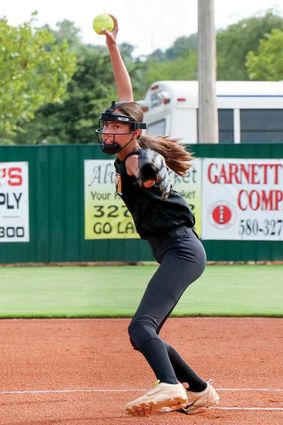 Starting pitcher for the Ladybugs Hallie Hamilton pitched all 3.0 innings against the Lady Bearcats on Thursday.

Alva didn't have a response with their turn at bat in the bottom half of the first, and Mooreland came right back where they left off with a seven-run inning to lead Alva by 11.

In danger of being run-ruled, Alva needed five runs in the bottom of the third after the Bearcats plated three more runners in the third to put the score at 0-14. Hamilton picked up Alva's first hit of the game with a hard ground ball out to center field for a single, but with two outs already, Sammy Hawley hit a ground out to second base to end the game with a loss to Mooreland.

Hamilton was the lone hitter for Alva, hitting 1-for-2. Hamilton also pitched all 3.0 innings against Mooreland, allowing five hits and 14 runs (seven runs earned), while walking seven and striking out one.