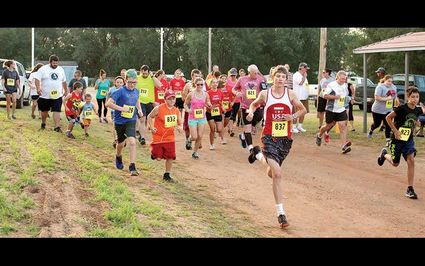 On your mark! Get set! Go! Over 60 runners signed up to participate in the Red Bluff Classic Run. Photo by Katie Strehl

The following results are of the annual Freedom Red Bluff Classic Run held Aug. 19 in conjunction with the rodeo. Runners began arriving as early as 6:30 a.m. to participate in the event.

The 5K (approximately three miles) began at the rodeo grounds and wove through the town of Freedom, finishing on Main Street in front of the Bank of Freedom.

There was also a fun run (approximately one mile) in which several people took part. Runners included people from Freedom, other Oklahoma towns and even some as far away as South Carolina.

The rodeo attracts families from all over the country, and th...