Goldbugs take a big win on the road against Thomas 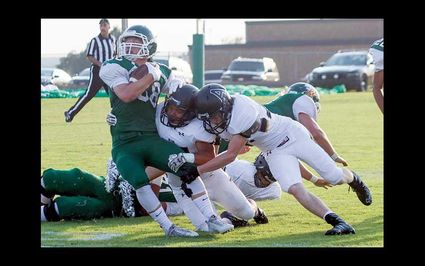 Arturo Cisneros (middle) and Dawson Manning (far right) stop the run for no gain on the play.

THOMAS, Okla. – After a slow start for the Alva High School Goldbugs against the Thomas Terriers, Alva pulled out the big win over the Terriers for the 49-7 victory.

The Goldbugs struggled early as they began the game with first possession but were forced to give the ball back to Thomas after going three and out to punt the ball away on a fourth-and-1.

The Terriers saw a lot more success in their first possession of the night as they followed a 3-yard quarterback keeper up the middle with a 14-yard pass to put them just outside of Goldbugs territory at the 47-yard line. Despite that good...