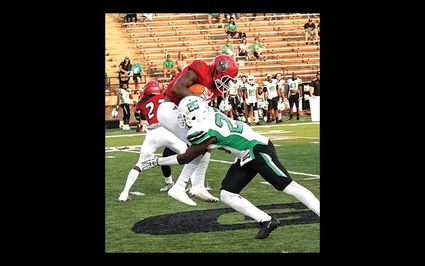 Ranger running back Horaito Smith (1) of Amarillo, Texas, is stopped by the Boll Weevil Brandon Porter (25).

ALVA, Okla. – Northwestern Oklahoma State hosted the Arkansas-Monticello Boll Weevils for a thrilling 37-35 game, but the Rangers unfortunately came up short in the contest.

Isiah Weed had a pretty solid night as he was 16-of-26 for 270 yards as well as two TDs through the air. He also ran the ball very effective as well, rushing for 49 yards on 11 carries, scoring three times in the ballgame.

Leading the way by way of the rush was Anthony Cota, who netted 57 yards on the night.

After a near 100-yard game last week at Ouachita, DaShawn Gordon had a spectacular night, racking up 130 yards...