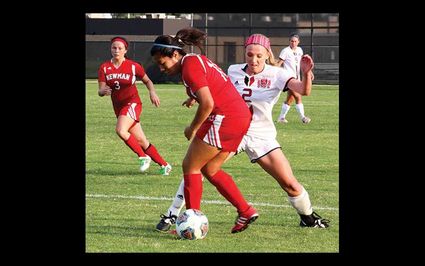 Bailey Jarvis (2) tries to get the ball away from the Newman offense. Northwestern played Newman University Tuesday afternoon and lost 8-1.

ALVA, Okla. – The Northwestern Oklahoma State University women's soccer team suffered an 8-1 loss at the hands of the Newman University Jets on Tuesday evening. The Rangers' lone goal came from Yazmin Gomez who drove home her first of the 2017 season.

Northwestern had a great chance taken away early when Karla Lopez was tripped from behind on a breakaway, resulting in a yellow card for the Jet defender.

The Rangers managed just seven shots against a determined Jets squad that was coming off a 4-1 victory over Washburn on Sunday. Newman peppered the Northwestern goal with 31 shots, with Ky...