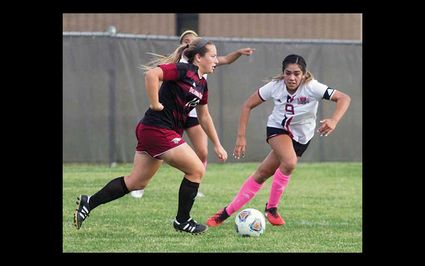 Lady Ranger Yazmin Gomez (9) chases the offense with her eye on the ball during Tuesday's game.

ALVA, Okla. – In their third double-overtime game of the season, the Northwestern Oklahoma State Rangers came away with a 4-3 victory over Oklahoma Christian University. Sophomore Hollie Pankake scored the game winner 2:51 into the second overtime period on a penalty kick to give Northwestern back-to-back wins for the first time this season.

With an explosive season-high 30-shot performance, the Black and Red picked up goals from four different scorers Tuesday evening at the Alva Recreation Complex.

Coming off their first victory of the season Saturday against Harding, Northwestern had vi...