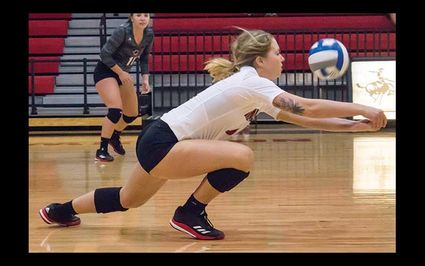 ALVA, Okla. – In a non-conference matchup Tuesday against the Aggies of Oklahoma Panhandle State, Northwestern Oklahoma State dominated the match and took the opponents down 3-0, (25-14, 25-12, 25-10).

The big storyline was the serving of the Rangers who really kept the Aggies off balance, dropping in 12 aces on the night as Tobi Barker led the team with seven while Hannah Williams and Kaitlyn Robinson each had two.

Not only did Williams have a great serving night, but she also dominated at the net, recording 18 kills and a .457 hitting percentage. Jennifer Eubanks also had a big evening as she had 11 kills and recorded no errors on the evening. The sophomore Middle Blocker hit an astonishing .786 for the match, making her the single game record holder for attack percentage, her second time in two games to accomplish that feat.

Assisting in many of the kills this evening was standout freshman, Robinson who finished the match with 38 total assists.

Northwestern came out of the gates hot and lit up the scoreboard with six straight points to begin the first set of the match, forcing the Aggies into an early timeout. Two of the Barker aces also came in that six-point span. 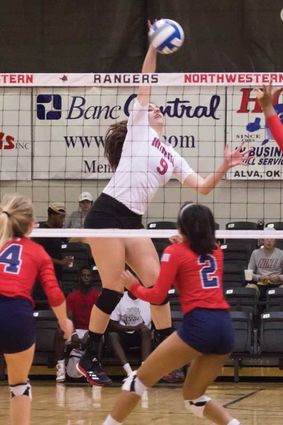 Hannah Williams (9) goes up for the kill. Northwestern played against Oklahoma Panhandle Tuesday afternoon and won 3-0.

It would only be six points later before the Black and Red forced the visitors into another break as they started to really pull away at 12-3.

There wasn't much else the guests could do to stop the Rangers in set number one as it ended in a 25-14 thrashing.

OPSU came out a little stronger in game two, but two straight aces by Robinson quickly diminished the spirits of the Goodwell natives. The second set would be closed out by the Rangers who went on a huge 10-2 run to close out the second by a 13-point margin.

Coming out of the intermission, Northwestern showed no mercy as it ended as the worst deficit of the night, allowing OPSU just 10 points on the board, compared to the hosts 25.

Overall, the home team finished the match with 41 kills and hitting an amazing .451 as a team, 12 aces, one block, 39 assists and 37 digs to take down the cross-state foe.