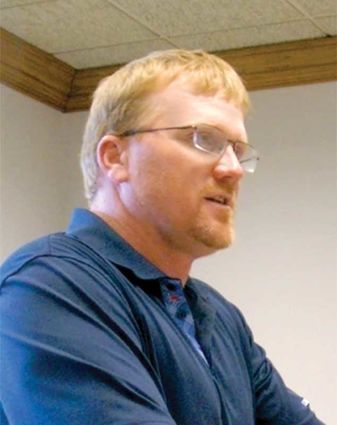 NWOSU Rodeo Coach Stockton Graves discusses the Ranger Rodeo scheduled for Oct. 26-28 in Alva. The rodeo was granted $15,000 in tourism tax funds to pay for the stock contractor.

The Alva Tourism Tax Committee approved three requests for tourism tax funds during a special meeting Wednesday. They also discussed the slowness of progress by the marketing company working on a website and branding for Alva. Committee members present were Norville Ritter, Dr. Charles Tucker, Terri Parsons and Bryce Benson.

The committee voted to approve minutes of the July meeting. During discussion of the financial report, Ritter said the most recent fourth quarter numbers were no worse than the previous year. He expressed hope that tourism tax collections have stabilized after a long downward trend. The report shows the committee has $584,743.86 available for funding requests.

Alva Chamber of Commerce Director Alex Mantz presented the annual request for $6,000 to be used in paying a secretary to staff the chamber office and the Northwest Oklahoma Visitors Center at 502 Oklahoma Blvd. The tourism committee has been providing this funding since 2011.

Mantz said the center receives from five to nine people a day, and that number increases when there are activities such as the car show in town. The office also receives lots of calls as well as answering email inquiries and mailing out materials about Alva and the area.

Mantz said she's learned Alva is on a cross country dirt bike route called the Trans America Trail and is looking for more information. Benson said he talked with someone who was traveling the route. He was told the backroads route is purchased as a paper roll-up guide.

The committee agreed to provide the $6,000 for another year.

Mantz also spoke to the committee about a color full-page advertisement in the 2018 Red Carpet Country Visitors Guide. Mantz said the guide covers a 16-county area and is distributed throughout Oklahoma, southern Kansas and the Texas panhandle. It is available at the local visitors center.

The tourism committee has also been funding this advertisement since 2011. For 2018 the cost will be not exceeding $2,350, the same amount requested for 2017. The committee approved paying for the ad.

Northwestern Oklahoma State University Rodeo Coach Stockton Graves presented a request for $15,000 for the 2017 Ranger Rodeo. The event will be Oct. 26–28 at the Woods County Fairgrounds. Graves said this will be the fourth rodeo of the season on the college circuit. At the OSU rodeo, 633 contestants were entered. Last year, the Ranger Rodeo had 572, but Graves thinks numbers will be up. He's predicting around 650 contestants.

Asked about the size of his rodeo team, Graves said he has about 80 students entering rodeos, but the roster includes 112. He said those not actively entering events are either fifth-year students who are not eligible to enter or others who just like to be around rodeo and help with events.

Graves said the rodeo will be much like previous years including the downtown Wednesday event for school kids to try rodeo skills. He said that usually runs from 8 a.m. to 4 p.m.

The committee approved the $15,000 requested to pay for the stock contractor.

When Ritter asked for remarks from the committee, Tucker said he just met with Back To You Marketing (BTY) the other day. He said the tourism development subcommittee is "still not getting anything very concrete" from the agency. "I'm disappointed personally," he said. Tucker and Benson are members of the subcommittee. 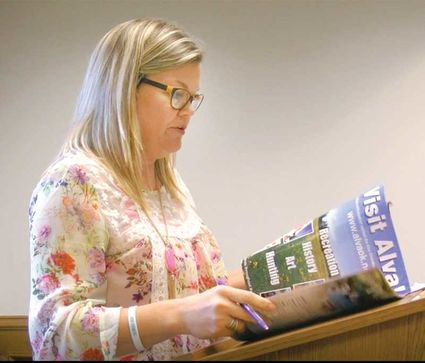 Benson asked when the next payment to BTY is due, but no one could recall. According to previous news reports, the agency was to be paid half of their $58,000 fee with the signing of the agreement. The next 25 percent ($14,725) is due with the launch of the website, and the final 25 percent is to be paid within the first six months or upon completion of the project. The contract was approved by the tourism committee in June. Another $1,000 was approved for a promotional video.

Tucker said about additional payments, "he's going to have to do some major work."

"Can we hold off on that payment, even if it's due?" asked Benson. "Since he hasn't delivered what he is supposed to do yet," added Ritter.

"I don't think we should be making any more payments until the committee is satisfied we're moving in the right direction," said Benson. Tucker added his agreement.

"At one time I was told he would have a website up and running by the car show," said Ritter. The car show was Sept. 22-24. "And it's not there yet," said Benson.

Tucker said BTY took video of the Nescatunga Arts Festival for the website. He said he saw the result. "It's not real good quality video," he commented.

The video of the entire meeting may be viewed at http://www.AlvaReviewCourier.com.