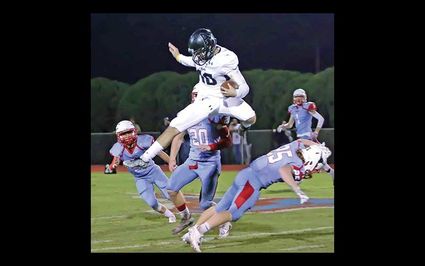 Alva quarterback Mitchell Meyer (10) hurdles over Chisholm player T. C. Smith (25), who is followed by Chishom's Brice Chance (20). (Apparently such a hurdle is illegal in high school football, but not in the pros or in college.)

It was a long drive back to Alva Friday night after the Goldbugs suffered a disappointing loss to the Chisholm Longhorns, 33-21. The two teams came into the game very evenly matched. Alva was 5-0 while Chisholm was 5-1 for the season. Both teams have a strong defense. Going into the game, Alva had allowed an average of 12 points against them compared to 11.17 for Chisholm.

The Goldbugs started off strong, scoring the on...