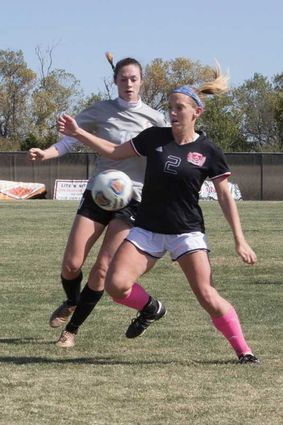 Bailey Jarvis (2) tries to get in front of the Southern Nazarene player to get the ball. Northwestern lost to SNU Saturday afternoon 3-4.

ALVA, Okla. – Northwestern Oklahoma State University women's soccer dropped a 4-3 double overtime thriller to Southern Nazarene University on Saturday to officially close the book on their 2017 season. After jumping out to a 3-1 lead, the black-and-red struggled to contain the Crimson Storm offense as Southern Nazarene rallied back for three unanswered goals, including the game winner six minutes into the second overtime.

The Rangers struck first just six minutes into the contest when the potent combination of Karla Lopez and Yazmin Gomez struck yet again to give Northwestern an early lea...