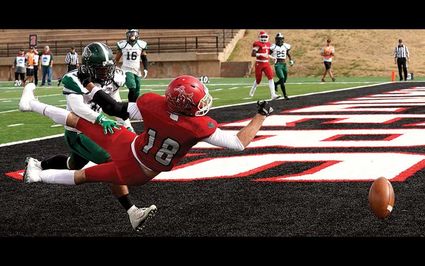 Almost a TD catch for Ranger Gavin Garner (18) in the end zone as the ball bounces behind him. The play was defended by OBU's Jacy Ivory (31).

ALVA, Okla. – For the second straight game, the Northwestern Oklahoma State football team made it very interesting towards the end of the game, but pulled out the win this time around against the Oklahoma Baptist Bison, 31-24.

Northwestern rushed for an impressive 316 yards on the afternoon where two Rangers were over the 100 yard mark in Jacob Peyton and Anthony Cota who had 145 and 109 yards respectively.

Horatio Smith also had a stellar game on offense as he caught two passes for an astonishing 125 yards and a TD.

The defensive side of the ball had a few standouts as Maurice Wright Jr....