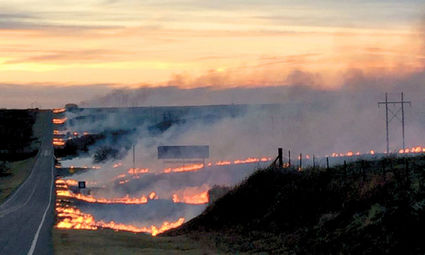 Numerous fires were sparked Monday along U.S. 64 east of Camp Houston in Woods County. Many fire departments responded to keep flames under control.

Area firefighters responded to a mutual aid request from the Freedom Fire Department Monday evening. Grass fires were sparked to the north of the U.S. 64 highway to the east of Camp Houston.

Alva Fire Chief Kirk Trekell said his department was contacted at 5:23 p.m. and reached the fire location an hour later. The fire was burning from the north side of the highway to about a mile north. Trekell said a vehicle with mechanical problems sparked a series of fires along the highway.